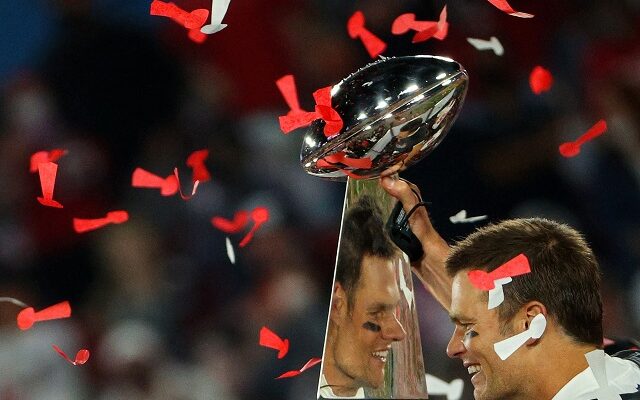 TAMPA, FLORIDA - FEBRUARY 07: Tom Brady #12 of the Tampa Bay Buccaneers celebrates as he is reflected in the Lombardi Trophy after defeating the Kansas City Chiefs in Super Bowl LV at Raymond James Stadium on February 07, 2021 in Tampa, Florida. The Buccaneers defeated the Chiefs, 31-9. (Photo by Patrick Smith/Getty Images)

@tombrady This was kind of a wake up call to be honest. @Jack Harlow #firstclass ♬ original sound – Tom Brady

In the :10 video you can hear he’s listening to Jack Harlow’s song, “First Class” and even throws up the Louisville “L” during the line, “I been a (G), throw up the (L)…”

Then you hear a voice off-camera ask, “What are you doing?” To which Tom replies, “nothing…” So funny!